Skip to Main Content
It looks like you're using Internet Explorer 11 or older. This website works best with modern browsers such as the latest versions of Chrome, Firefox, Safari, and Edge. If you continue with this browser, you may see unexpected results.

This guide will help you learn how to properly cite sources in APA style and how to avoid plagiarism.

The basic components of a table are as follows:

To learn more about tables and see numerous samples, see pp. 199-224 of the manual.

Limit the use of borders or lines in a table to those needed for clarity. In general, use a border at hte top and bottom of the table, beneath column headings, and above column spanners.

You may also use a border to separate a row containing totals or other summary information.

Do not use borders around every cell in a table.

Avoid shading in tables as well. Use notes to provide emphasis when needed. Italics or bold in cells may be used with explanation in the table's general note. 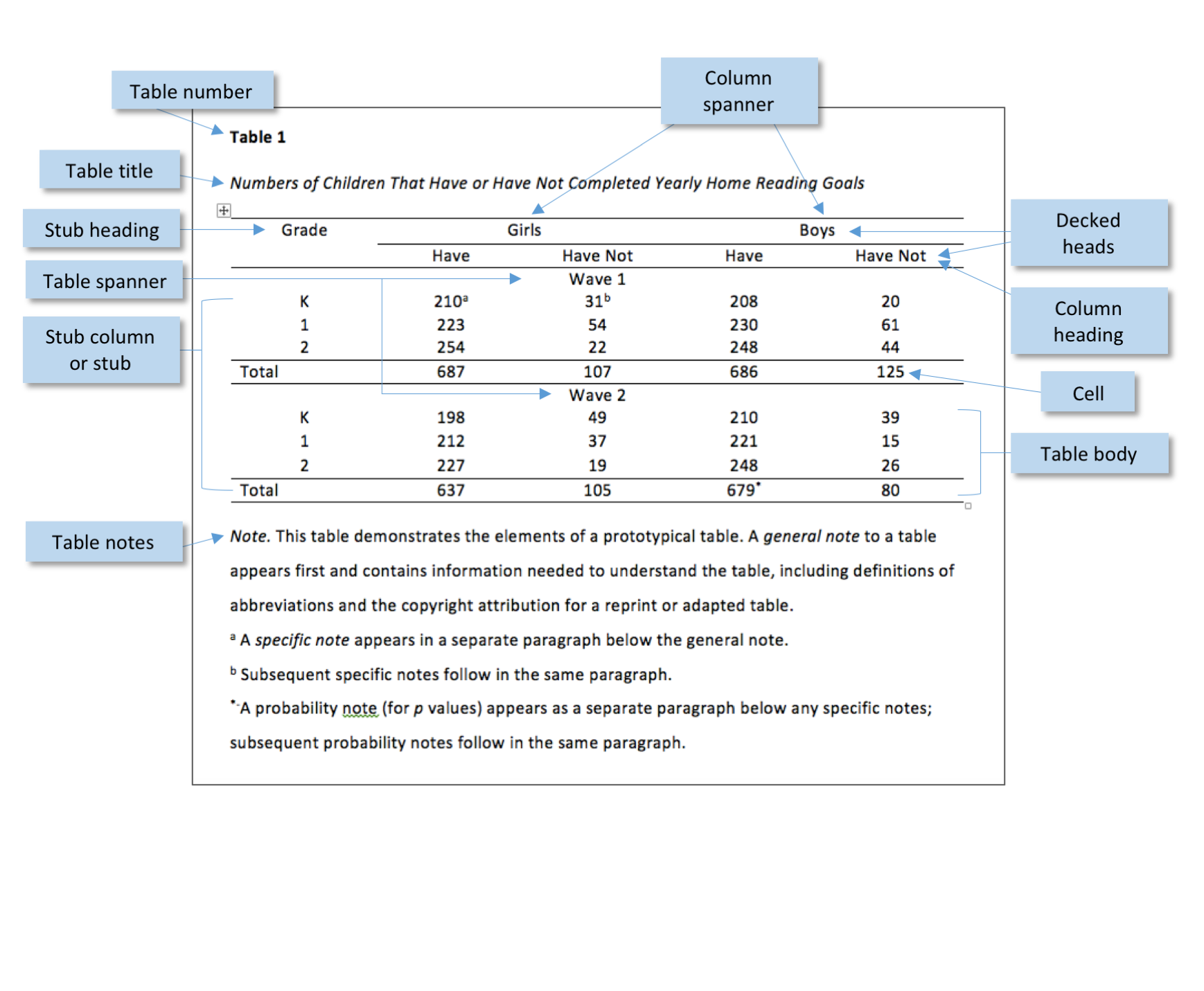 Number all tables that are part of the main text (i.e., not part of an appendix or supplemental materials) using Arabic numbers--for example, Table 1, Table 2, and Table 3. Assign the numbers in the order in which each table is first mentioned in the text.

Write the word "Table" and the number in bold and flush left if the table is found in the main text.

If a table is found in an appendix, give each one a number preceded by the letter of the appendix in which it appears (e.g., Table A1 is the first table within Appendix A).

Give every table a brief but clear and explanatory title. The basic content of the table should be easily inferred from the title.

Headings organize and identify what is in each column of a table. Table headings should be brief.

A stub column, or stub, is the leftmost column of the table; it usually lists the major independent or predictor variables. To show subordination within the stub column, use indentation rather than creating an additional column.

The headings above the columns to the right of the sub column identify what is in each column. A column heading applies to just one column; a column spanner is a heading that covers two or more columns, each wit hits own heading. Headings stacked in this way are called decked heads.

More complex tables may require table spanners, which are headings within the body of the table that cover the entire width of the table.

Use sentence case for all headings in a table. Center all table headings above their column(s). Stub headings, column headings, and column spanners should be singular unless they refer to a group. Table spanners may be singular or plural.

The table body contains information organized into cells. Information in a table body may be in the form of numbers, words, or both.

The body of the table may be single-spaced, one-and-a-half-spaced, or double-spaced.

If entries are longer than one line, use a hanging indent of .15 in. or one em space. In the stub column, center the heading and align entries flush left. It is permissible to center entries in the stub column if they are significantly shorter than the stub heading. Entries in all other cells should be centered.

When using decimal values, if possible, carry all comparable values to the same number of decimal places.

If a cell cannot be filled because data are not applicable, leave the cell blank. Use a general or specific table note if you need to explain why the cell is blank. Use a dash in a cell if data were not obtained or not reported.

Do not include columns of data that can be calculated easily from other columns.

Tables may have three kinds of notes:

General notes qualify, explain, or provide information relating to the table as a whole or explains any abbreviations, symbols, etc. The general notes also includes any acknowledgments that a table is reprinted or adapted from another source.

General notes are designated by teh word "Note" (italicized) followed by a period. Explanations of abbreviations and copyright attributions appear at the end of the general note, in that order.

A specific note refers to a particular column, row, or cell. Specific notes are indicated by superscript lowercase letters.

Within each table that has specific notes, order the superscripts from left to right and from top to bottom. The corresponding specific note below the table begins with the same superscript letter.

Multiple specific or probability notes are separated from each other by a period and a space.

Double-space all table notes, and align all notes flush left.